“The economy, stupid” is the quintessential catchphrase of American politics.  Coined by James Carville to focus campaign efforts during the 1992 race, this quip says less about voters’ priorities than it does about the psyche of politicians.  Any time a candidate promotes their prospective role in the economy, one thought comes to mind: Is this a tyrant who believes the president dictates the fate of the US economy and desires that power, or is this a depraved cynic who knows the office’s limitations but deceives the electorate into believing otherwise?

The fortunate irony for most investors is that Carville’s slogan explains why the person occupying the Oval Office is not very important.  Over the long run, the performance of the stock market coincides with economic fundamentals.  Thankfully, a president’s policy initiatives have little to say about the secular trajectory of those fundamentals.  If they did hold sway, should we not observe some discernible pattern between market performance and the party in power? Instead, we see roughly the same average annual return for stocks regardless of who holds office.

History does reveal, however, an evident and unfailing catalyst of market swoons: recessions. In a rational world, “The economy, stupid” is a motto of markets, not presidential races. 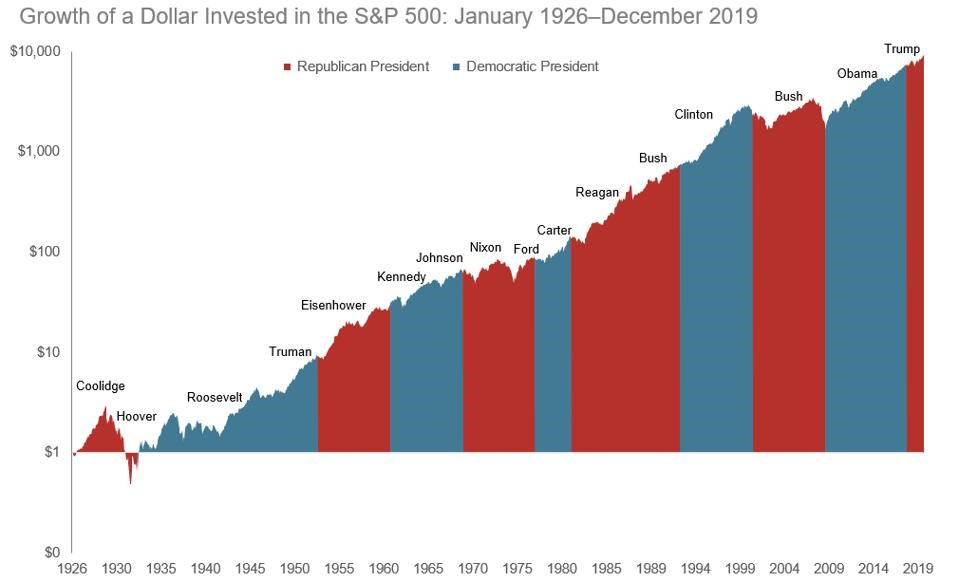 To those concerned that this time is different, we concede that Election 2020 is unlike its modern predecessors.  Never has a contested election been a foregone conclusion.  Never has there been so much skepticism about either side acting in good faith.  Until now, something other than a peaceful outcome has never received serious thought.  And that aberration invites market tumult.

But there is also a mitigating feature unique to this cycle. Markets are preparing for a raucous election outcome, as we see in the prevailing price of portfolio insurance.  Today, the cost hedge against stock market losses exceeding 10% is nearly four times as expensive as it was in 2016.   Investors did not prepare for surprises in the last presidential cycle, which set the stage for a highly volatile election night and days following.  The fact that markets are now anticipating an uncertain outcome does reduce the likelihood of extreme market moves.  The “wait until after the election” mindset is pervasive, and it does weigh on equity prices to at least some extent.

This dynamic does not mean the coast is clear for November and beyond.  We will see volatility as traders react to the minutia of election information flow.  But participating in that drama is a fool’s errand, as there simply is not an informational edge to exploit.  Ultimately, the short-term market outcome of this episode is outside of anyone’s control.

So that leaves us once again relying on the mantra that suits every environment: don’t predict, prepare.

To the surprise of no one, this election cycle is devolving into a nightmare befitting of 2020.  It’s impossible to entirely segregate one’s emotional investment in the direction of our country from an assessment of capital markets.  Therefore, as the election drama ensues, we are all well-served to focus on making prudent decisions on matters within our control.  And for sanity’s sake, remember that portfolio success depends on a long-term process oriented towards achieving specific objectives, not on any politician or party of questionable competence or motive.